You Cannot Pay it Back, You Have to Pay it Forward

I would like to think of myself as a good son to my parents. I was not the rebellious one. I followed a middle path in life, did okay academically, did not sign report cards on my parent's behalf, wore my older brothers clothes till I was 15, did not steal money from my parents (okay that's a lie),  did not consumer adult content before I was18 (again a lie). So in a nutshell, I was an almost Adarsh Balak. At least I ensured that all my non-adarsh adventures are hidden from the eyes and ears of my parents. I think I did reasonably well at the hiding them. Because I have not heard my parents complaining a lot about me as a son. I would go a step further and assume them to be reasonably proud of me.

I had always thought that we children are burdened by a debt which we will never be able to pay off. The debt of sacrifices that our parents have made for us. The debt of one way giving that we have been at the receiving end of. At times, it puzzled me as to why parents do so much and for so long for their kids. I remember discussions with friends and we all said that our parents wasted their lives for us and we would not repeat their mistakes. We would leave no inheritance or property for our future children. In short, we said that we will put ourselves before our children.

As I grew older, the burden continued to weigh on me. I would judge myself as a callous son whenever I argued with my parents. On occasion, I would even sit and think about how I have not been a great son. In my subtle attempts to lessen this burden, I stuck to the expectations of my parents for the better part of my life. I did not want to let them down, bring them worries or troubles. I also made some special efforts at times (e.g. taking my mom to places of worship in my summer breaks, doing things academically which will make them proud). Of course, these small steps don’t relieve me of the debt I owe them, and I always felt the need to do something more for them. I was hoping that life gives me chance to redeem myself.

And life actually gave us that chance, our daughter entered our life, like a miracle. In a split second, the answers to all those questions and worries came to me.

Why do parents do so much for their children for so long?

How do children pay them back?

Why parents put their children before themselves?

So many questions. One answer.

“One cannot pay it back; one has to pay it forward.”

It’s a chain of love that we are all part of. Your parents were doing to you what their parents did to them. You have a duty to take this chain forward. You will make similar sacrifices for your children. Now, this is not to mean that once you become a parent, you forget your parents and focus only on your kids. In fact, if at all, you become a better son and daughter after becoming a parent. Because then you are not in conflict with yourself and your parents. You don’t question his one-way traffic of giving from your parents, you accept it. And once you accept it, you don’t want to pay it back. You just want to play your small part in the chain of love. 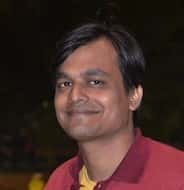 Aashish believes in equal parenting and no gender roles for both parents and kids. He also feels that there is an acute shortage of material, stories and communities of new fathers. Fathers are seen as supporting characters in parenting and he wants to help change that image. He can be found on Instagram @pappablogs