Woman vs. Toilet - Three Things I Learnt About Myself

I was recently tasked with having to replace the toilet seat/lid of our bathroom. I know, this doesn’t sound like a major milestone or a crazy task, I’m sure. The thing is, if you knew me five years ago, even three, I would have relied solely on my (ex)husband for this job. Or I would have called a plumber. I know, right? Silly.

So, back to this toilet seat. The other day my 36-pound four year old somehow managed to break our toilet lid into three pieces. I still have no idea how he managed to do it. I couldn’t even be mad at him. The fact that this tiny little human is capable of such destruction was just kind of impressive.

First task, go buy a new toilet seat. I had no idea until the other day that there were so many options to choose from; color, size, wood, plastic, padded, not padded. Whoa. We went with the standard cheap, plastic seat because now that I know my son has some hulk in him we just can’t have nice things.

Second task, remove broken seat, and install new one. Let me start by saying, if you think your bathroom is clean, but you’re not taking the time every so often to remove your toilet seat (bolts and all) and scrub all of that down, you’re living a lie!!  — I am a clean freak and let me tell you the horrors that unfolded with removing that seat and those bolts are not horrors anyone should have to see. I will now be making it a priority to pull that seat off once a month and sanitize all of it. ALL. OF. IT.

So, I know it was just changing a toilet seat. Not some Emmy winning performance or some major scientific breakthrough, but baby steps! This whole process taught me some things about myself.

I Am Way More Capable Than I Give Myself Credit For.

I’m so used to having someone else do the “hard” stuff, or at least what I view as hard, that I’d forgotten that I am more than capable of getting things done on my own. Frankly, this wasn’t even that hard, just disgusting.

I Might Be Way More OCD Than I Thought.

This whole toilet seat dirty has brought my neat freak to a whole other level.  When I say that removing those bolts was a bit traumatizing I am not being dramatic (maybe a little), but it was so gross! So.Gross. And I’m a person that cleans the bathroom a lot.

I’m Pretty Sure I Can Handle Anything Life Throws At Me.

After having to stick my hand into the toilet to retrieve my screw driver (because I’m still clumsy) I’m convinced I could probably go on Fear Factor (if it was still a thing) and win.  Putting your hand in toilet water, not knowing if it’s clean or dirty ranks up there with wrestling alligators. OK, not really. but it’s still brave!

Anyways, I guess what I’m trying to say is anything can be a moment of self-reflection. Everything you do can be a lesson (or a reminder) of just how capable and awesome you really are. Don’t ever sell yourself short by believing you can’t do something. 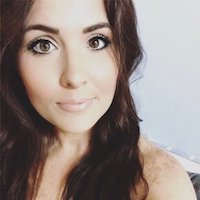 Kathleen Nelson is a mom blogger focusing on her journey as a single mama of four. She shares the ups and downs of parenthood, divorce and mental health while holding it all together with a bit of coffee, dry shampoo, and a sprinkle of sarcasm. You can follow her experiences on her blog: www.sweatpantsandtopknots.com