The Day After A Spanking - What We See At School

A child’s confidence is not determined by their peers, but by the people they hold most dear.
20 September, 2018 | Ritu Kumar

At first it was a little acting out in class, nothing out of the ordinary in a primary school classroom. Then it became a little more overt, uncharacteristic for that child. Then came the made-up stories to get attention and that’s when the alarm bells went off in my head. Following protocol, I had a conversation with the school counselor and after several discussions, we invited the student and her parents to school for a sit down.

“What would you like to say to your parents?” was the first thing we asked her. “I want you to stop hitting me”, she blurted. Caught off guard, the parents were mortified. They didn’t anticipate that their methods of discipline would become a discussion at school.

This isn’t the first instance of its kind and certainly won’t be the last.

As a teacher, observing a child’s behavior, their social interactions and attitude towards themselves and those around them is a regular part of our day. We spend a significant portion of a child’s waking hours with them. Their traits and mannerisms provide us with valuable insights into their personalities, as well as their family dynamics.

As we know, nurturing begins at home from the moment a baby is born. Therefore, a child’s confidence is not determined by their peers, but by the people they hold most dear. It’s common for parents to justify their actions with explanations that revolve around culture or their own upbringings. “My dad did the same and it did me no harm. I’m tougher for it.”

Spanking is never the answer. Raising a hand will never teach your child the desired lesson. It does however cause fear, increased anxiety, low self-esteem and a free ticket to do the same to another child or adult. What a child will retain from the incident, is not the lesson he was supposed to learn, but rather how he felt when he was hit by someone he trusted.

Parents generally spank to reduce undesirable behavior and increase discipline. However, children whose parents view spanking as an acceptable method of discipline have far greater difficulties socializing, have tendencies towards aggression at school, and lack the necessary problem-solving strategies which are not being modeled at home.

So, the next time your child does something wrong, something that makes you angry, instead of raising your hand, try something different. You could try talking to them, maybe giving them a consequence or taking away something they will miss. Try teaching them the lesson differently.

How did we deal with the situation I described earlier? Our advice to the parents was to evaluate the consequences of their own actions the same way as they would their child. You smack your child that evening because she made you angry or did something wrong. She goes to school the next day, maybe a little quieter than usual, maybe she starts to retract. It’s possible she will socialize a little less during recess, keeps to herself. Maybe she starts lying to get attention. Maybe she develops a tendency to manipulate. Maybe she starts hitting other kids when she doesn’t get her way.

What she definitely isn’t doing is talking about her feelings. She is definitely not focusing on math or writing and is probably spending time thinking about the night before or living in fear of the next time she may disappoint. The decline in academic progress, effort and interest are evident. Small incidents with her peers cause anger, frustration and aggression because that’s the learned behavior. Yet again we find ourselves in the uncomfortable position of making a call home because of the child’s behavior at school. Will dad be angry when his child comes home from school that day? Will he raise his hand? And the cycle continues. 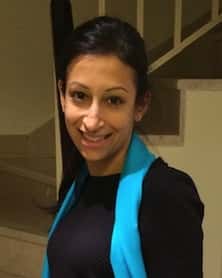 Ritu Kumar is an elementary school teacher with over a decade of experience in international schools, with a particular focus and passion for literacy. Since becoming a parent, she loves using her background as an educator to think of creative ways to entertain her toddler.