Today My Daughter Is Going to a Birthday Party

As a Dad, I have a responsibility to be a positive male role model. To show that men can be present, caring and loving. It's a challenge I accept every day and one that I obsess over. It's my raison d'etre. But, fuck me. A toddler's birthday party really pushes the limit of what I can tolerate.

Those two hours will be gone, just like your will to live.

Firstly, if you're on the fence about whether to have kids or not, never ever go to a kid's party. I can't imagine many circumstances where childless adults would but if you somehow find yourself in this unfortunate position, run away. And I don't mean ‘Run around the chairs until the children's entertainer stops playing The Cha Cha Slide and find a chair as soon as the music stops’. I mean ‘run into the sea or a fire or into oncoming traffic’. Any of these things would be better for you. Honestly, and there must be some scientific research to back this up, over-exposure to a toddler's birthday party will result in an aneurysm of the brain.

If you are a parent already, there’s basically no choice. You will have to sacrifice a good 2 hours of your life putting up with some or all of these things (and no, those two hours will be gone forever. Just like your will to live.)

I really, powerfully hate entertainers. Entertainers are smug, over-enthusiastic control-freaks. They can take their PR systems and their balloon animals and shove them up their arse.

Someone will cry. Someone's balloon will pop, and their worlds will come crashing down.

Most other parents are great. We're all there because we love our kids and we parents should band together and support each other. Some, however, are judgy c*nts.

I mean, fucking hell. All of your senses will get abused but your hearing… for every kid's party you go to, expect hearing aids one year earlier than expected. Go to 10 a year? For 3 years in a row? Expect hearings aids on Thursday. Or lifelong tinnitus.

My daughter has now left the last two parties with loads of sweets. As if the hyperactivity of cake, balloons, games and Baby Shark wasn't enough stimulation for them. I know it's a party but a sack of sweets? What next, a bucket of sweets? A trough of sweets? How about an intravenous drip of Coca-Cola?

Do I sound cynical? It is just that parties should not be at the expense of your savings, your hearing or your happiness. You shouldn’t be organising one to show off how much you love your kid, nor should you do it to get tons of anomalous presents to spoil your little one even more. But the truth is, this often is not the case. I know parents just want to show their children love. Of course, they want them to have a special day.

I think what it really boils down to is that I just really don't want to go to this party. 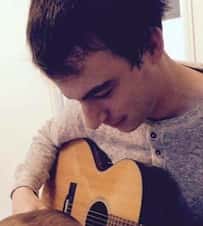 Matt Bull is a dad from the UK, which is a bit like being a dad from other parts of the world but he has to cope with Brexit as well. He is a maths teacher who still hasn't solved a Rubix cube and music lover who has forgotten how to play the guitar. He likes to blame his wonderful children for his failings. Can be found on Twitter occasionally swearing about them under the name @happygrumpydad. He loves them really.