Putting Life First Made Me A Father

I hadn’t even become a father when I realised that it is through putting life first that you eventually find the greatest joy.

I was in a position where I knew that I wanted a family but found it very difficult to imagine how that could be possible. I was working for one of the world’s leading museums: a whirl of international travel, dinners and parties and networking. I would do a day in the office followed by one or more evening events, either as a host or because I felt fortunate to be invited to something unmissable. Once a month I would travel somewhere for a week or so. It was great, it was my dream job.

Bit by bit, I realised what that actually meant and what it was taking out of me. It was a hard thing to admit. I took a long look at my life and particularly the balance, or lack of it, and knew that something needed to be done. I left my job, giving up the structure, security and identity that went along with it. I needed to take this radical step to open up the possibility that something different could happen - whatever that was going to be.

Soon after I decided to go freelance, I met someone, a single dad. It didn’t scare me that he had a kid, which it probably would have done before. Within a couple of years, we were married and I officially became a father.

It was stepping away from the world of full-time work and the realisation that there was more to life than fundraising dinners in far-flung places that opened me up to the possibility of fatherhood. The glitz has been left behind but life as a freelancer created the space for something truly important and life changing. I can drop everything to be with my family.

And sometimes - often - I need to drop everything.

Our son was adopted aged four after a traumatic start in life. So most of my introduction to fatherhood has been creating attachment bonds with someone who finds attachment very difficult. Above everything our son doesn’t want toys, what he wants is time. And so the more time we can spend together the better. He doesn’t take to after-school clubs or babysitters, so we took the decision that we needed to do all the childcare ourselves. And we’re fortunate that as a couple we can split that responsibility.

There was a period where we were being called more often than not to collect him early from school, or to be told that he would be excluded for a day or two. Neither of us would have been able to hold down a full-time, fixed-hours job in those circumstances. Now he is in a specialist therapeutic school and he’s adapting brilliantly. Even so, with a short school day and an hour’s commute either end, one of us is doing a half day every day. If we’re going to work effectively, we need to be able to use the time whenever we can grab it.

Working for The Hoxby Collective means that we can follow our own workstyles; defining our hours around our life and working from any location, whether that’s back at home or in one of our favourite libraries or cafés near the school. We can respond to our son’s needs and spend the time he needs to create great family bonds. And it’s not all about him, we feel very lucky to be able to indulge in the joys of our family every step of the way.

Even more fundamentally than that, I can honestly say that I don’t think I would have found fatherhood if I hadn’t found a way to put life first. 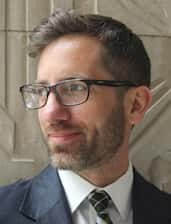 Leo is an artist, creative entrepreneur and arts fundraiser.