It's Time to Stop Teaching Our Children Gender Bias

A few weeks ago, it was "Crazy Hair Day" at my son's preschool. He is three-years-old, and if I do say so myself, he has one of the most gorgeous heads of curly hair I've ever seen.  We tend to let his hair grow out until it reaches a length where brushing it, irritates him. At that point, we have his hair cut shorter, and then let it grow again for about six months before repeating the cycle. During ‘Crazy Hair Day’, my son's luscious locks were long enough to fit in a ponytail, so I did his hair up in a topknot scrunchie, and off to Preschool we went, alongside my 5-year-old daughter. I could see the pride beaming in his little eyes as we walked towards his classroom.

As we passed my daughter's older group of friends for her drop-off, one of the 5-year-old girls in line shouted:

"Look everyone, a boy with a ponytail."

The mama-bear in me wanted to give this little girl a stern talking-to, coloured with a few choice expletives, but the rational thinker in me knew that it wasn't this little 5-year-old’s fault that she thought this way. It doesn't take a rocket-scientist to know that these statements and ideas are learned, but it absolutely enrages me to know that this learning takes place at such an early age. So, I responded with the only thing I knew how to say - knowing it wasn't sensible to dispute a 5-year-old who doesn't know any better, but hoping to make it a teaching moment:

"Ummm, yeah - you bet he's wearing a ponytail.  It's Crazy Hair Day and all the cool kids are doing it.  And even if it wasn't Crazy Hair Day, he can wear his hair however he wants. Boys can wear ponytails too."

Thankfully, when we walked into my son's classroom with the younger kids, not a word was said. The beauty of three-year-old’s, is that they don't yet seem to carry these biases. Their souls are still pure, and their expression is not yet meant with the judgemental glare of society. This was also proven to me at the beginning of the school year, when my son proudly went to preschool with blue nail polish on. Prior to school starting, I took my daughter to the nail salon for some one-on-one time, and my son was absolutely in crocodile tears that he couldn't come with us. So, my husband put some shoes on him, followed us to the nail salon, and my son got his nails painted too. Once he got used to the colour, his little face lit up with such joy that he too could have nails painted like his sister's. As a mother, it is a beautiful thing to have kids still at the age that they can fully express themselves without judgement. It breaks my heart, however, to know that if my son went into that same classroom only two or three years later, that he would likely be met with ridicule.

Apparently, it doesn't take long for other troublesome biases to rear their ugly heads in children. In January of 2017, a study published in the journal Science indicated that children as young as 6 can believe men are innately smarter than women. Andrei Cimpian, associate professor in the psychology department at New York University, co-authored the study, which observed 400 children ages 5-7. In one portion of the study, girls and boys were told a story about a person who is “really, really smart,” and then asked to identify that person among photos of two women and two men. At 5, both boys and girls typically associated intelligence with their own gender, meaning that most girls chose women and most boys chose men. At 6 and 7, however, girls were “significantly less likely” to pick women, and more likely to align with gender stereotypes, perceiving men to be smarter.

Folks, kids are learning this from somewhere, and it pisses me off to no end. Moms and dads everywhere - this bullshit has to stop. Full tilt. And it's on us to teach our kids better than this.

Some of the ideas my 5-year-old daughter has brought home from school are already igniting my protective mama-bear rage. Recently while dancing to some music at home, my daughter said, "Hey mommy and daddy, I can show you guys Girl Dancing and Boy Dancing." After picking my jaw up off the floor from hearing that, I decided to see what she meant first, before deconstructing whatever idea she had in her mind.  Boy Dancing, according to my daughter, was fast, aggressive and done to an upbeat song.  Girl Dancing, was gentler, ballerina-like, and done to the beat of a slower, calmer song. I let my daughter complete her dance-party before explaining to her that there was no such thing as Girl Dancing and Boy Dancing. Boys can dance however they want. Girls can dance however they want. Both boys and girls can express themselves however they want.

I've also just about given up on the idea of gender-neutral clothing. Having a girl and a boy just under two years apart, it would be great to have some hand-me-downs that weren't so tailored to one gender or another. Pink, unicorns, and sparkles are abound for girls, while dark colours, superheroes, and plaid are for boys. I've been able to find a handful of things that don't fall fully into one gender-biased category, but let me tell you, it takes some digging. Once in a while, my daughter will wear a dark superhero shirt, and my boy will wear something bright with sparkles. I wonder how long this is going to last. I feel like clothing stores are contributing to my daughter's new notion of Boy Colours and Girl Colours, which we've also spoken about recently. My optimism was triggered during a recent conversation with my daughter that she was hearing what I was saying:

Me: "Listen honey, boys and girls can do the same things. Boys can wear pink. Girls can wear blue."

My Daughter: "And boys can wear ponytails!"

I worry, that even though I strive to have these conversations with my kids, that eventually, Society is going to weigh heavier on their choices and opinions, thereby weighing on their confidence.  It shatters me that at this precious moment in time, I might be seeing the very last of my kids' pure souls before Society tries to tell them how to look, act, or dress. I refuse to give up, though. I believe these frequent discussions are part of the work we all have to do as parents if we want our future to include equality for men and women, and freedom of expression for our kids.

Part of my job as a parent is to make sure my kids are loved, fed, clean, warm, and secure. I am far from perfect, but I try my best to teach good manners and behaviour. I draw the line, however, at telling my kids how to dress or behave based on their gender. That is part of their own expression, which does not belong to me, and it certainly does not belong to society.

This past Halloween, my hope for the future glowed a little brighter. When I dropped my son off at preschool, every single kid in his class was dressed as a superhero. Every. Single. Kid. Boys and girls. It reminded me that these kids really are our future, and it's our job to make sure they feel like confident superheroes all the time. Both my son and daughter went dressed as Spiderman, and I'm going to do everything in my power to keep this freedom of expression alive in our house. 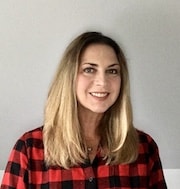 Jennifer Douglas is a mom of two based out of Toronto, Canada. She is a realtor, freelance writer, blogger, and content creator. Before having kids and *way back* in the glory days, Jennifer was the team captain for UCLA swimming, and represented Canada on the National swim team. Now, to stay active, she runs short beer races and chases her small kids around the house. You can catch her blog at goldfishandchickennuggets.com or follow her on Instagram @goldfishandchickennuggets