I Struggled to Dad Today

I don’t know how or why it happened. Recently I’ve had a couple of restless nights. My Hay Fever has been bothering me. My Daughter has been in a bit of an “emotional” state. I’ve been feeling a little down. Whatever it was, I really struggled to dad today and it’s made me feel awful.

It started with the usual early morning wake up call. iBear has been returning to her pre 6am rises of late. Her Gro Clock is normally set to around 6:30 – 7:00 on a weekend and she usually pops into our room to check on the time. She then disappears again until it’s time to get up. On occasion and despite our attempting to reason with her, she ends up coming in every 15 minutes. Today was one of those times.

The sun finally came up on her clock and she sprinted into our bedroom shouting “daddy will you play with me!” I stretched, groaned, got out of bed and replied with the usual “after my breakfast sweetheart” retort.  This didn’t seem to work today.  She was under my feet like a cat that hadn’t been fed in a day, constantly asking when we can play.  I wasn’t feeling top of the pops anyway and this was grinding me down.  I ended up being pretty sharp with her and we had breakfast in relative silence.

I’d finished my cereal and was sipping a cup of tea when she started again. There was no let up. I bit my tongue and calmly explained that I’d play with her after I’d finished. And so, the whinging started again…. I don’t know how I managed not to shout but I got through it, finished up my brew and got down on the floor to start playing.

The motivation wasn’t there though.  As much as it pains me to say, I just didn’t want to do it today. This gets me frustrated with myself as I love these daddy-daughter playtimes and I always try to make the effort for her. Just not today. I couldn’t get into that zone. I think iBear could sense it too as she asked a couple of times if everything was ok, but I just said I was tired. How could I say to my daughter I didn’t want to play with her and just wanted to sit?

In reality, I wouldn’t have just sat. There’d have been a multitude of little jobs needing doing and I would have just pottered around. But, My Daughter isn’t very good at self-play. She’s never been one for just sitting in front of the television for long either. This is something I’m happy about to be honest and would never encourage. But this means I have to be on hand a lot of the time to play and entertain, which I normally don’t mind at all. Just not today.

We had a lovely day out planned at Alnwick Castle, the sun was shining, but sadly my mood wasn’t. I couldn’t shake it off. I had hoped that on the way there she may have dropped off. She’s not one for napping much these days but I could tell she could have done with 30 minutes or so. But no, she was awake the whole time, asking how long it was going to take to get there.

Once we arrived and got into the grounds we settled for a picnic, which was actually a nice few minutes of the three of us sitting and watching the world go by. We finished up and headed into the main Castle. Immediately iBear wanted to run along an embankment and shouted for me to join in.  I did, but again my heart wasn’t in it. What was wrong with me!

The next few hours were spent wandering around the Castle, watching some of the displays and generally exploring. There was still an undercurrent of tension in me which combined with my daughters general overtired state and lack of attention span, maintained this cloud I’d found myself living under today. We still had fun though. We ran about, pretended to shout the cannons and I watched her do roly-polys down the hill (I would have joined in but again – mood!).

Sadly, I ended up telling her off after she wouldn’t listen while I attempted to hand back some play costumes we had found. There were tears and I was filled with a combination of frustration and guilt as I knew a lot of this was down to me not being DAD today. A nice little respite occurred playing some crazy golf which we all really enjoyed. There was also a joust display in the grounds behind the castle which was very impressive.

So, it was time to head back to the car and we promised on the way we would get iBear an ice cream. There were two choices; a cone from the little kiosk outside the visitor’s center or a tub inside the café. She chose the cone, from the kiosk, where about another 30+ people were queued. I think I moved about a meter in the time it took my wife and daughter to nip to the loo and come back but I stayed the course. I wasn’t going to be a further source of unrest by insisting we ditch the queue and go inside the café. We got our ice creams and found some shade to eat them. iBear ate hers up, reached the cone, nibbled at it and then said she doesn’t want it. I just laughed. What else could I do. Would this day ever end!

We drove home and thankfully she dropped off. We all needed that bit of peace and quiet for a little while. I was still stewing though. Reliving the day’s events and still getting myself annoyed equally about being in a grumpy mood and not knowing why I was in a grumpy mood.

The rest of the day went by without incident. I got her showered and settled down for bed and despite it being Mammy’s turn to read her a bedtime story iBear insisted I do the honors. I was happy to. We had a lovely cuddle in her bed she fell asleep without any trouble.

I hate being in a bad mood, even more so when it affects the way I am with my daughter. I still have no idea what caused it. I’m writing this the day after and I feel a lot better. We all have down days, don’t we?  We can’t be on it 100% all of the time. I’m trying to tell myself that a lot today and I know the good days far outweigh the bad. I’m my own worst critic when it comes to being a Dad. I often overthink it which I shouldn’t as there’s no perfect blueprint out there.

Let’s just chalk this down to experience and move on. I have a daughter to play with! 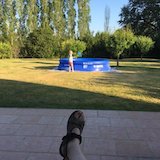 Neil - OneDadsView writes about life as a working Dad to his 5-year-old daughter "iBear". He loves reading, gaming and keeping fit. Twitter: @One_Dads_View