Far Away from Home

One very cold January winter morning in Washington, D.C. two months post-partum, I called my mother in a frenzy of panic and tears. I had been up all night, from, 11pm till 7am. My baby had been fussing, crying and wouldn't sleep. I was completely worn out, sleep deprived and exhausted. My mother panicked too, we had a 9-hour time difference, so it was 1am where she was. She had come to help with the baby after he was born and stayed with us for about 5 weeks. That had been extremely helpful, she took care of everyone and we really enjoyed having her around.

I told her that I had been feeling so drained and was having a really hard time with the new motherhood journey. My husband and I were really struggling, we had no prior parenting experience and the baby was really doing us in. In addition, at my 6-week post-partum visit, the doctor had said that all the signs pointed to my having post-partum depression. I thought she knew what this was, she had worked in a hospital (albeit in the diet kitchen) all her life.

On occasion she had diagnosed us with random illnesses as if she was a doctor and given us over the counter medicines of her own volition, most of which we reacted to violently. Alas she had no idea what I was talking about! She jumped into firm African mom mode and warned me decisively against listening to the ramblings of white culture.

In fact, she explicitly said to me, "It’s not post-partum depression, those are white people problems". She also warned me against confessing to people that I was "crazed" (loosely translated from vernacular), because nobody would want to befriend a crazed foreigner no less. She reminded me that I should be grateful I had a baby to begin with and that there were other people praying for what I had, therefore I had to be grateful. Goodness!

That was effectively the last time her and I talked about this. I wasn't exactly surprised at her reaction, I was just hopeful and needed my mommy. Sadly, this would be the reality even as I tried to reach out to some of my friends and cousins. I then realized that it wasn't a topic that people accepted and were willing to discuss or deal with openly. I thought back to the new mothers I saw in my older cousins and other family members. I am now certain that they too were going through PPD, but never got the help, because we don't discuss mental health issues or deal with them. Culture dictates otherwise, society will label you as a madman. Nobody wants that stigma.

It was a dark period, one that took longer than I would have liked. I remember being stuck indoors for days on end, because it was too cold to get out to the playground. The sheer weight of being around my baby every waking moment of my life would reduce me to tears. The sleep deprivation didn't help either.

However, I am grateful for the wonderful support of a few mom friends I met in Georgetown. It got easier and by talking about it and sharing with other mothers who were going through or had had similar experiences. The camaraderie brought some solace that I leaned on during the very difficult times as a new mother.

Unfortunately amongst my closest family members, it is still a less than desirable talking point to discuss and I have learnt not to bother them with the details. I understand that the dynamics are not the same. Back home, help is in abundant supply, the village it takes to raise a child is in excess. There is always an aunt or cousin ready to relieve you. Paid help is very affordable. Live in nannies are a very normal thing, even I grew up with one. The concept is not the same away from home. I was far away with no family and had to figure it out all by myself.

It has gotten easier, 3 years and 2 children later. My little family brings me much joy and my first-born son is now a bubbly toddler who still prefers wake time to sleep and I am grateful for my wonderful friends who helped me through it all. I'm still far away from home and family, but I am grateful for the access to help and the boldness with which PPD and other mental health issues are tackled here.

It's NOT white people's problems mom, and I am no longer ashamed :-) 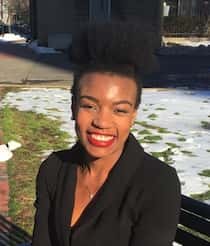 Mel is a Zimbabwean living in Sydney Australia. She is an exhausted stay at home of 2 beautiful babies. She lives with her husband in Sydney, Australia. Mel is an obsessive tea drinker and reads in her very little alone time. She enjoys going to the beach and engaging other parents and friends on Twitter. Catch her on @ndeyangu (expat mom)