As a dad of two beautiful girls, I find myself in a position of having to do their hair on more occasions than not.

I, like most dads out there, have not had the experience before. As much as it saddens me to say it but, doing hair is perceived as a mum job.

It’s now becoming more and more of a shared role as with everything, not that I mind doing it at all.

Most weeks, a day doesn’t pass where I have to do hair, and at the beginning this was a daunting task for me as was the wipe ‘down and not up’ practice. I, like most dads had not encountered this before, and it took me an age to get right. At one point I wondered how many more times the hair can be brushed before it starts falling out. Every attempt I took at styling it, it just wouldn’t work, it wouldn’t stay flat or neat for all my hard work.

Like all things in life if you are doing it for the right reasons it will all work out, right?

My eldest whom we refer to as the tall one, has a thick mop of hair and to some it looks untameable, I was indeed part of that “some”.

Eventually it has all worked out just fine, I do it regularly and now even take requests on styles from me now fashion conscious four-year-old.

As with most “mum jobs”, modern dads find themselves thrust into the position of having to adapt and execute. Now one wants to see they child looking like they were dressed by a drunk fairy with hair that’s just messy no bun.

Despite many dads stepping up, there is still a stigma attached to fathers “parenting” on all fronts. My better half took “the fat one”, our youngest, for her one-year checks and was asked about work and who looks after the baby when she’s at work, to their surprise the answer was dad. Which in our household is a common answer, where possible I do the majority of parenting while their mum works and vice-versa. So, my better half was surprised by the response she got when the answer was their dad, as she was barraged with comments about baby groups and how nice it is to see dads being involved...

I, like most dads do not see this as an amazing thing or even a hardship/sacrifice, we passionate about our kids and their development so we are involved.

So, when it comes to doing hair, changing dirty nappies or doing night feeds. Despite all the fuss we make and how difficult we make it seem we are just happy to be involved, we are more than just the one that takes out the bins and does the handy work, we are parents and we love every moment of being a dad and wouldn’t change it for the world.

To all the dad that are yet to get involved and be hands on, my advice is get stuck in as you definitely won’t get the chance to do it again. 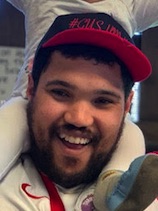 Brett is South African born and currently resides in Buckinghamshire, UK. He lives with his partner and two girls, aged 4 and 1. Has recently started a blog called daily dad life. And you can catch him on Instagram @dailydad_life