Children’s Mental Health: What If My Son Ends Up Like Me?

Our eldest son NJ is now eight and I don’t think a single day goes by where I don’t wonder how he grew up so fast. Clothes that we bought a matter of weeks ago are already looking small. And when did his feet get so huge? He has always been confident and independent, but he seems to need me less and less – he can read and write, search the internet for his homework and make his own sandwiches. Yet whilst I watch him sort his Match Attax, read, play Fifa or watch TV, my thoughts inevitably turn to the future: what kind of young man will he grow up to be? Will he still be happy, outgoing, confident?

It was Children’s Mental Health Week in Feb and it has coincided with my growing worries. In a world where 1 in 10 children are affected by mental health problems, I worry that we are not doing enough for him, worry that we won’t be there to help him, worry that our intelligent, complex and confident boy ends up like me.

I remember being eight. I remember 8th August 1988 specifically. I still remember watching Blue Peter with Mark Curry in it, of all things. Looking back at old photos of my childhood, I see a happy boy pulling faces. I had a love of Teenage Mutant Hero Turtles, Transformers and Micro Machines. Everything felt simple and all I wanted to do was play. I had close friends and we’d often load up on snacks and go on adventure bike rides (which happened to be down the road but it felt like miles).

Looking at the photos from when I turned 12, I see a different child. Gone is the carefree goofy happiness and in its place is an awkward, withdrawn grumpiness (I’ve destroyed all the photos). I can’t pinpoint an exact moment things felt different. There was no catalyst or traumatic event in my life. My family has always been stable and protective. However, I tend to think it was the transition to secondary school, acne and braces.

Don’t get me wrong, my school was far from rough but there was a nastiness that caught me by surprise. I’d been in arguments and little tussles before, but the world was always right again the next day. At secondary school, there were rivalries and cliques that permanently tainted you.

I remember the first days being very lonely. My close friends either went to a different school or moved away and despite the best intentions we soon lost touch. I made new friends, but it turned out my idea of friendship wasn’t the same as theirs and I was repeatedly excluded from games and meet ups. If I disagreed with one over something I was right about, everyone would all take their side no matter what. I never got particularly close to anyone, like it was a series of temporary friendships. I was occasionally bullied, mainly threatened, but generally learned to fly low and unnoticed.

Looking back, I know now that I was depressed, yet I didn’t seek help. I didn’t even know how. Nobody ever talked about words like depression or anxiety or suicide or self-harm. I didn’t understand the feelings I had and didn’t want to seem weaker than I already did. After all, what did I have to be depressed about? I didn’t have abusive parents, I had a comfortable home, I was healthy. I couldn’t talk to my parents and no one seemed to really understand me.

Things improved as I got older and started sixth form, then moved to University. My insecurities remained but I got better at hiding them and pretending that I was ok. I made new friends and met my wife, but I admittedly I have always felt a certain degree of disconnection and uncertainty over what normal really was.

If there is one thing that terrifies me is that our eldest with follow the same path. Studies1have shown that parents can pass on mental illness to their children genetically. If a mother has depression, this increases to 19%. If both parents are depressed this becomes 25%. Whilst environment has a massive part to play, the idea that our children are born with the odds against them is troublesome.

NJ is highly-sensitive and experiences intense emotions. He wants to play and have fun, but games need to be on his own terms and any perceived unfairness or inequality will lead to an inevitable meltdown. Others struggled to understand this. Life isn’t like this, and it inevitably leads to frustration and then anger. Since starting school, it has lead to various issues with other boys picking on him or provoking him to trigger a reaction. He has drifted apart from some of his best friends and I worry that, as with my own childhood filled with temporary friends, it is a sign of things to come.

I tell myself that he is young, that he is still just a baby and that it will be different for him. What if it isn’t? I know what signs to look for, I hope. We often talk to him about feelings, about understanding them and realizing that they are perfectly normal – whether it is happiness, sadness, anger or whatever. Where I felt that I couldn’t talk to anyone or felt that it was a weakness to feel low and insecure, I hope that he knows he can talk to me or his mum. And if not us, then as long as we keep talking about the mental health of children and highlighting the services available, then at least he could find someone else.

And if he does end up like me, then at least he would know he isn’t alone.

Sources: An article in the Telegraph which explores the possibility of fathers genetically passing on depression and anxiety to children. Another article in the Independent and here talks about parents more generally and the link to an over-active part of the brain that can lead to mental illness. 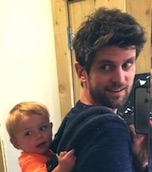 ThreeTimeDaddy is Dad of 2 boys and a girl. Voted 'best daddy ever' by one and 'rubbish at reading and football' by another, but the youngest is yet to form a reliable opinion.