Defying heredity through love, life and art
24 May, 2018 | Joe Holroyd

I am very much my father’s son. A child of the 1960’s radical Marxist generation, Bob Holroyd was an idealist, an educator and social leader who aspired to do good in the world. He was also a gentle, creative, and loving father.

I am also something of an idealist, an educator and pedagogical leader, who – in my better moments – aspires to do good in the world. And, with my dear wife Nicole happily five months pregnant, and our son Bobby growing bigger by the day in her belly, I also aspire to be such a father.

Despite his gentle, creative and loving nature (or perhaps, in part, because of it) my father disappeared out of my life before I reached my 11th birthday. At his best, Bob Holroyd snr - already connecting passionately with undergraduates as he lectured in sociology and history at the precocious young age of 21, and equally actively connected with the various progressive social reform movements of the era - was a charismatic and persuasive force of intellectual and social connectedness.

A dynamic young powerhouse of a social activist and academic, in many ways he was ahead of his time. But there was a darkside to this precociousness, these (proto-millennial) manically-connected propensities of his.

The psychiatric condition of bipolar, otherwise known as manic depression, describes a condition of highs and lows. A state of dramatic oscillation between phases of manic energy, connectedness and productivity, and those other phases of deep, dark, debilitating depression.

Professor Darian Leader is a renowned author, practising psychoanalyst and member of the Centre for Freudian Analysis and Research and of the College of Psychoanalysts - UK. In Strictly Biploar, Leader writes:

If the post-war period was called the 'age of anxiety' and the 8os and 90s the 'antidepressant era', we now live in bipolar times. A diagnosis that once applied to less than 1% of the population has risen dramatically, with almost 25% of Americans estimated to suffer from some form of bipolarity. Mood-stabilizing medication is routinely prescribed to adults and children alike, with child pre­scriptions increasing by 400% and the overall diagnosis by 4,000% since the mid-9os. The question today is not are you bipolar?' but 'How bipolar are you?'

Leader’s work offers an insightful and thoughtful commentary on the manner in which the condition of Bipolar is also often associated with great creativity, innovation and connectedness, naming Catherine Zeta-Jones, Stephen Fry, Jean-Claude Van Damme, Demi Lovato, Adam Ant, Tom Fletcher and Linda Hamilton as but some of those whose great creative energies have an equally dramatic polar opposite.

The confidence, exhilaration and energy that charac­terize the early phases of mania seem so well suited to the exhortations to achievement, productivity and intense commitment that today's businesses demand. In a fiercely competitive world where job stability and security are increasingly eroded, employees have to prove their worth by working longer and longer hours and pro­fessing ever-more ecstatic belief in their projects and products. The inevitable days off due to exhaustion and depletion are seen less as evidence that something is wrong than as almost a part of one's job description.

We live, it seems, in bipolar times. Or at least – in the era of Facebook, twitter and other forms of 24-7 multi-device social media – in an era of manic connectedness. And, as this manic connectedness grows, for at least some of us, the risk of its (bi)polar opposite – debilitating, isolating depression – seems to grow proportionately.

So that’s the factor of cultural nurture, in our bipolar times. But what about nature – or such factors as heredity?

According to America’s National Institute of Mental Health, when one parent is affected with Bipolar, the risk to each child is 15-30%. And, if not knowing precisely these statistics growing-up – a pervasive fear in my childhood was that I might be ‘doomed’ to the same fate as my poor, gentle, not-quite-for-this-world father.

And how did I deal with these fears – this (manic) amplification of the already tempestuous developmental phases of (pre-)adolescence as I watched my father’s fine mind deteriorate?

In the same way that I have since dedicated my life as an educator to helping young people to learn more about self, others and world. Through that same Appolonian and Dionysian dialectic that – at its worst – can be a form of madness. But which, at its best, is artistry, life, love, and learning. As Shakespeare writes in A Midsummer Night’s Dream

The lunatic, the lover, and the poet

Are of imagination all compact

I believe that in the best teachers, there is something of the poet – as we help students to find a language (in poetry, prose, or code) to make sense of this crazy world they find themselves in. There must certainly be something very close to love in our commitment to this endeavor. And if there is some lunatic creativity along the way… perhaps we need to help our young people find these outlets.

Certainly, where I differed from my father’s pathway into academia most pronouncedly was in the space I gave myself in my late teens and early twenties for some more… shall we say Dionysian learning! Relieving myself from the conveyor-belt of school-to-university academic rigour, I immersed myself in the UK urban music scene, DJ’ing and MC’ing, writing lyrics, dancing all night and just generally being of imagination all compact with the other ravers of my generation, not beginning my undergraduate studies until 21. I have since completed four post-graduate degrees – all while working full time! I needed some creative space to really find my direction.

As I celebrate becoming a father myself, and welcoming the next Bobby Holroyd into the world, I still mourn my father’s sad fate, I still struggle with my paternal void, and am still aware of the highs-and-lows we all experience from time to time – bipolar or otherwise. But I am happy with myself, my dear wife and our son’s future. Why? Because I lean far more towards the poet and the lover than the lunatic; because it is in healthy expressions of creativity and therapeutic sharing – clinical and musical, to name but two – that the various polarities of my humanity find expression.

Bipolar is a serious psychiatric condition, to be sure. Like the above quoted Darian Leader, to be sure, I am somewhat skeptical of the current state of (Anglo-)American psychiatry. The core of Leader’s trenchant critique of the multibillion dollar marketing of antidepressant and mood stabilizing drugs are summarised well in his opening gambit in interview for RSA discussing his more broadly discursive work What is Madness?: ‘Definitions [of abnormal psychology] have shifted towards symptoms that are treatable with specific drugs, so [via the DSM] the drugs have created the market'.

We live in a psychiatric-labelling, over-prescribing culture. And if, like me, you have suffered with the spectre of such labels, such diagnoses, hanging over you or your family members, I implore you to try looking beyond these labels and diagnostic categories. Look beyond the (market-driven) reductive diagnoses, to the real people, to the lunatics, sure, but also to the lovers, the poets, the teachers, the mothers, the fathers - and the sons - who may inhabit these.

I would like to dedicate the music video above to the memory of my father. But also to any of you who – like me, and he – may have grappled, creatively and otherwise, with the Bipolar condition.

Thank you for reading. 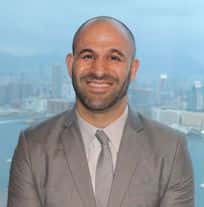 Joe Holroyd comes from London and works in educational leadership but is also trained as a counsellor - which labour-of-love he also shares with Nicole, who is a Marriage and Family Therapist. Joe is a passionate advocate of lifelong learning, writing academically and creatively, and has published throughout the UK, US and China. Outside of work, Joe enjoys hiking, boxing, reading and sharing a broad love of the arts with his wife and friends.