My wife and I have always been fond of children. Even before we met, in each of our families we were the de facto go-to uncle and aunt that kids were happy to hang out with. It is in fact one of the traits that drew us to each other. Naturally, after we got married we were keen to have kids of our own sooner than later.

However, this wasn’t in our cards. After eight years of trying to get pregnant, involving virtually every conceivable treatment method -- IUI, IVF and everything in-between -- we accepted the fact that we were never going to have a biological child. I remember how it broke us each time we were told the news by the various doctors, and how it was especially trying for my wife who really was the one bearing the brunt of the many physically and mentally gruelling procedures.

The option of adoption was always at the back of our minds, but it only came to the fore when we could no longer ignore the fact that the years were slipping away (I was touching 38 at the time.) Fortunately for us, adoption was always a strong consideration -- I can’t remember there ever being any angst at the prospect of bringing a child into our lives that ‘wasn’t our own flesh and blood’, although subsequently when we spoke to prospective adoptive parents, this is the one hurdle that many recount.

"We had love to give, and the biology of it didn’t really matter at all to us."

And the four magical years that have since passed with our daughter Tenaya have only reinforced this. (We named her after a gorgeous lake we chanced upon during a vacation in the US years earlier -- a blissful time in our lives. Her name translates to “great leader” in Native American.)

The homecoming
Just like with expecting a baby naturally, nothing can really prepare you for the big day. And I’d say more so in the case of adoption, where you go from experiencing no manifestation of the impending arrival of a baby, to... simply having a baby in your home. When we first saw Tenaya (she was named Gargi at the time), she was a healthy little bundle with big, inquisitive eyes that seemed to drink in the world around her. It was surreal, cradling her in our arms, knowing that one day we would see this little human take her first steps, graduate, walk down the aisle, even have children of her own. It was like a still point in time, where our lives flashed forward and backwards in a blitz, leaving us dazed in the realisation that we were at a defining moment in our existence.

When Tenaya came home, only three months at the time, she lit up the lives of everyone in the family. Both our parents were overjoyed; like a piece of them that had been missing all these years suddenly fell into place. For me, it was love at first sight, and she is her daddy’s girl. While I try to play the fair parent that loves and disciplines their child in equal measure, I’d be lying if I said I’m not particularly forgiving of her mischief and wiles. But from day one, I decided that I was going to be entirely hands-on in raising her. Nothing was going to be off-limits: changing diapers, bathing her, comforting her when she was ill and cranky at 4AM, learning styles of plaits... it all had to be done.

Tenaya has a mocha-brown complexion (similar to mine, as opposed to my wife who is closer to skim milk). In mannerisms, she is closer to my wife though - outspoken and strong-willed as a four-year-old can be. Along the way, whenever I’ve been asked about whether genetics plays a role in the development of a child, I’m only too vociferous to state otherwise - Tenaya exemplifies nurture over nature. She’s grown into a toddler that endearingly embodies traits from both of us: the way she speaks, walks, her proclivity toward cold weather (me) or her mad love for speed (my wife).

During the adoption process, we were blessed to have interacted with some truly wonderful individuals, one of whom was a child psychologist who helped counsel us and other prospective adoptive parents about the journey we were embarking on. Most importantly, she stressed how important it was to treat our adopted child normally. Not specially. Not like they were ‘so special to be in the situation they are’. Going off the deep end and being overly effusive with the child would, we were told, put undue stress and expectation as they grew. “You’re a special girl/boy”, “You were specially chosen for us”. No!

Also, we were advised to explain to her at every opportunity -- and as early on as possible -- about the fact that she was adopted. Yes, adoption isn’t a bad word, and it should never be associated as such. So ever since she was a baby, we used to talk to her gently about it even though she didn’t comprehend. Then as she grew older, we brought in the concept of her ‘tummy mummy’ who loved her very much but could not take care of her. We even drew parallels from stories and experiences that are part of her childhood (Disney and Dreamworks are great sources: Kung-Fu Panda, Jungle Book et al). These days, she talks about the fact that she is adopted as normally as she does any other subject -- candidly and confidently. Nothing makes us prouder.
Over these past few years, I’ve come to realise a few things (we parents are wise creatures)! After all, a child does give birth to a mother and a father. And as a father, there are a few tenets I try to live by.

Adoption does bring you face-to-face with those mammoth, often philosophical questions: Am I ready for this? Are we doing the right thing? What if she grows up to hate us? No matter what answer one settles on, it really boils down to a simple realisation: we are on this planet for a smidgen of infinity. So what legacy are we leaving behind? How important are the things we consider important? At the end of the day we’re just one, big human commune. All that people really want is to love, and be loved. In our case, we couldn’t manifest that love naturally, so we chose the path we chose. And now, we couldn’t be more ecstatic. 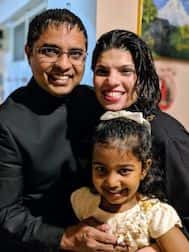 Marco is a dad, entrepreneur, technologist and photographer, though not necessarily in that order. When he's not out cycling with his toddler, he's generally tinkering around with a computer or taking in a sci-fi novel. After being a tech journalist in India for 19 years he decided to move over to corporate communications, and now manages PR for consumer products in Google India.