The loss of a grandparent is often the first moment of grief felt by a child. It leaves a profound impact.

I have been lucky enough, through friends, to experience grandparents who were younger and thus able to be more involved in their grandchild’s lives.

I remember being looked after by my childhood best friend’s grandparents, playing hide and seek in their home.

Another lasting memory was being invited to breakfast with an ex-boyfriend’s grandparents every time I visited.

It was a form of family that I hadn’t had the privilege of having before and it’s something that’s made me realise how much I miss the grandparents in my life.

My own dad didn’t know his father and so, on his side, we have my elderly nana. As my last surviving grandparent, I consider her one of the greatest blessings in my life and as I have grown older, I have grown closer to her.

The passing of my grandfather, my mother’s father, however, perhaps had the most profound impact on my life and it’s only as I’ve grown older that I’ve realised this.

It is fair to say that I didn’t know my grandfather well. He passed away when I was no more than two, although the impact that he left behind on both of my parents has shaped the way I that have been raised and the way I see the world.

A grandfather’s bond with his grandchildren is completely unique. They’re an authority figure that gets the joy of raising a child without being the primary caregiver and can give a wealth of knowledge obtained over a lifetime. My grandfather’s presence continues to be felt, years after he has gone.

On a cold, crisp morning in South Africa, I am writing in a coffee shop, staring out into the ocean. For the first time in my month-long internship, I am feeling homesick. I’m determined to succeed in my chosen career of journalism, but anxiety has kicked in and the pressure to succeed is mounting.

This coffee shop has become a regular haunt of mine and it plays the same six songs on a constant loop. It is familiar and yet while the anxiety builds, one song catches my ear and my heart. I could have sworn that I had never heard it played here before and the moment it does, it calms me.

‘Back when I was a child, before life removed all the innocence… my father would lift me high… ’

My dad once told me, “I didn’t have a father and he became the father figure in my life. I looked up to him and his standards became my own – the meaning of family and his work.”

In my head, a picture plays out. I know that being taken from a photograph, it’s not really a memory. I am kneeling beside a watering can, around two years old, looking up at a man who beams down at me. His face is welcoming and kind.

I have always been told that the bond I had with him was unique and powerful. It’s not until that moment in South Africa that I realise how much.

That night, I dream. I’m on a walk with my grandfather. We have no fixed destination, yet the overwhelming feeling is one of complete serenity. When I woke up, I could have sworn that I felt the pressure of a hand in mine. The anxiety of the day before is absent and when I complete that internship, I am published in a variety of magazines.

The determination that I have had in my life and the values that I hold, come directly from my parents, and for them, from my Granddad.

My mum said, “Dad was a hardworking and honest man. He had compassion and high standards. He never left the house without a tie. Family was very, very important to him. His work ethos has rubbed off on me, which I wanted to pass onto my children. You don’t get anything in this life for free.”

“We kept our children close – we tried to make up for the fact that they couldn’t go to their grandparents’ house for a sleepover and the first sleepover with a friend became a much bigger deal. There was never anyone to help with the school run, or childcare.”

Yet, I can honestly say that I never felt like I missed out. I feel like I knew my Granddad, in the family that I have around me, and I hope that if he were here, he would be proud of how his family have gone on without him. 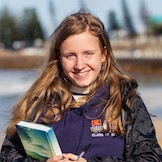