The eyes were what got us.

And not in a good way. It was a “what have we gotten ourselves into?” sort of way.

Four years ago last month, my wife and I welcomed our very first foster care placement. It was a pair of half-siblings: a sweet little girl and her baby brother.

At two years of age, the little girl was happy and healthy—soon bouncing around our house and saying “hi” to every new face she met.  She was enduring a crazy life-disrupting ordeal but seemed to be taking everything in stride.

Her baby brother was different.

He was 5 months old and came to us straight from the hospital. While there, the doctors weighed him in at a mere 10 pounds. They clearly and correctly identified that he’d been neglected. In the coming days we would learn that his sister’s paternal grandparents were already filing a petition for custody.  They loved her deeply, and she would only be with us for a very short time.

But days would turn into weeks without anyone stepping up for her little brother. There were no extended family members who wanted him. He was alone.

When I undressed him for the first time that night, I found that he looked more like a skeleton than a baby. He was impossibly fragile. His arms were thin enough that I thought, sure I’d break them when I slipped them back into his jammies.

His frailty was horrifying. But his eyes were worse.

They were the deepest blue you ever saw. Eyes big enough to swim in. But they were gigantic, haunting saucers. Huge eyes on a small child are normally adorable. But these eyes were not. The skin on his face was pulled taut by the lack of nutrition, leaving his eyes utterly expressionless. We noticed that he rarely cried out for attention, perhaps because none had ever been given. So, his giant eyes weren’t pleading, as children’s often are. It was as if they’d just given up hope.

Inviting foster children into our home was a huge, life-changing event. So, I took a picture of the kids to send to our families.

But then I looked closer at it.

The eyes were too much. There were family members who warned us against taking in foster kids. That the kids might be damaged in some way or damage us. Seeing those eyes would validate all their worst fears.

I still sent a picture. But one with the little guy far across the room instead. You could still see the eyes… but they weren’t as obvious.

On that first night we went to sleep with anxious stomachs. This little boy had been through more trauma in five months than I had in over 30 years. But now our paths crossed.

We would do what we could for him.  One feeding, and one snuggle, at a time.

It’s four years later, and he asks me that question every night. He won’t go to sleep without me next to him.

We’re a household of 6 now, and there are a million other things I could do with my time.

But then he looks up at me with his wide eyes, there’s no way I could say “no”.

The eyes are different now. They are still the deepest, widest blue that you’ve ever seen. But they are expressive, full of hope and enthusiasm. They carry no scars from where he started from. And those eyes are surrounded by the sweetest, healthiest, happiest face.

The years have been challenging. He’s not a “normal” four-year-old. He’s in a special school to help him with delays that hold him back. But his teachers tell us that he’s the life of the class. The social glue that holds all the kids together.

And now, he’s no longer a foster placement.

A certificate from the county and years of hugs, guidance and love prove otherwise.

So, when he asks me to sleep next to him, it’s an easy decision.

And we’d do ANYTHING for him. 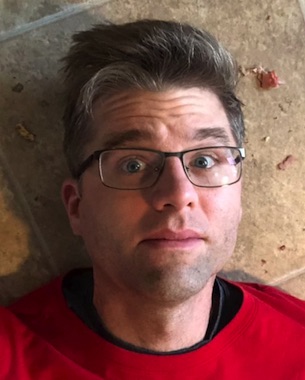 Richard Dean is an overwhelmed dad of four living with his wife in Buffalo, New York. He spends his free time drinking coffee, stressing out unnecessarily, and tweeting. You can find him there at @dad_on_my_feet.