I’m sitting in Son #1’s classroom at 12:30 on a Wednesday, and I notice that the kids gathered around him on the corner rug are not his usual classmates.

To me, they appear an unfamiliar mix of 4th and 5th graders, their common purpose marked only by the matching red lanyards around their necks. But to him, they are beloved teammates, readying themselves for tournament battle.

They are the Riverside Elementary Debate Team, 17-strong, receiving last-minute instructions from their teacher-coaches as they await word that the bus is on its way.

Word came, and we all rushed outside to greet our giant yellow shuttle. After the kids and coaches piled on, I hopped aboard as a newly-minted chaperone and judge.

This was my first rodeo, and I was anxious.

School buses have changed since my school days. Seats are plush with padding, seat belts are standard equipment, and A/C units blast arctic air throughout the interior. Aside from the legroom, which is tighter than on a discount airline, I was impressed.

Arriving Everglades High School, it was apparent how popular debate is. Busload upon busload of kids — at least 400 of them — filled the auditorium. The teacher-coaches and chaperone-judges numbered about 45 and 55, respectively. The adults remained standing to ensure most of the kids could sit.

Then came the two most reliable elements of any scholastic event: the waiting … and snacks.

We judges were ushered into a back room to receive instructions on how to grade a debate performance. After 40 minutes of sitting, snacking and making small talk with one another, we got about ten minutes of concentrated guidance.

The debaters would be performing in one of five different formats: Congress, Impromptu, Original Oration, Solo Interpretation and Duo Interpretation. We’d be judging two rounds of seven performances each.

We then walked through several hallways to the media center, also filled with snacks, and picked up our packets for round one. I would be judging duo interpretation, and I was excited. I grabbed a bag of Cheetos and bottle of water and headed out.

At the end of a long hallway I found my classroom and walked in. Fourteen nervous smiles awaited me. I introduced myself, thanked them for being there and asked if they had decided which of the seven teams would go first. They picked their order and we began.

These kids were amazing.

I tried my best to stay focused on their interpretive performances, only jotting down quick points to expand upon after they were finished.

Boom, just like that, we had gone through seven duo performances. I thanked them again and told them they should all be proud of their efforts before releasing them back to the auditorium.

I was a teacher once. For two years I served as adjunct faculty at the Art Institute of Miami, teaching an evening class in addition to working my day job in publishing. In many ways it was the most fulfilling work I’ve ever done. I’m still in touch with several of my former students.

But these teachers — the ones who guide and care for our grade school urchins — are special. They do battle on every front, from under-funded classrooms and apathetic parents to the vagaries of local (and national) politics and wages that belie their worth.

They teach for a variety of reasons, but each reason is threaded together by love. It’s a love that’s sent out into the world in the form of our children.

After judging round two I reunited with our Riverside team, and we headed to the gymnasium for the medal ceremony. Again, more waiting. This time there were no snacks, but the upbeat music allowed the kids to dance around and blow off some post-tourney steam.

The medals were handed out amid all the cheering and screaming of an Elvis concert. I was no longer anxious. I was hooked. My volunteer time had been richly rewarded and immediately gratified.

Son #1 didn’t medal, but he scored well for his original oration in only his second tournament. I couldn’t have been prouder of him.

On the bus ride back, evening began to fall. I reflected on a specific duo performance: an interpretation of Wonder, by R.J. Palacio. I had recently read the book at Son #1’s repeated urging, and many parts of it made me cry.

Earlier in the day, as I watched two 5th-grade girls reimagine three emotionally charged scenes from that book, I again fought back tears. These girls portrayed it so beautifully, with such gravity and clarity, that I was shook by the realization that they were the same age as my oldest son.

Kids grow up fast, and they always know more than you think they do. Son #1 had a reason for wanting me to read that book. He wanted me to know the lessons he’d learned from it.

Those girls gave me a window into my son’s world. And for the entire bus ride, I stared into it.

With a new sense of wonder. 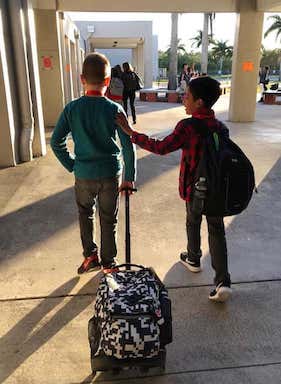 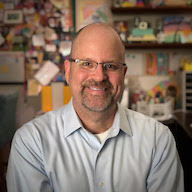 Slade Wentworth is a leader, coach and mentor in publishing and healthcare recruiting. He lives in Florida with his wife and two sons, where he also writes about family life when he's not making a mess in the kitchen. You can find his humorous takes on parenting and marriage on Twitter @SladeWentworth or connect with him on LinkedIn at linkedin.com/in/sladewentworth.